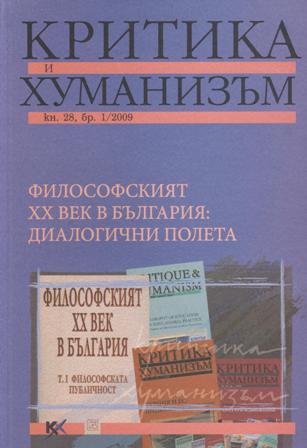 Summary/Abstract: The text represents a brief history of the Bulgarian school of philosophical mediaeval studies, as it includes the specific social and cultural environment, in which the school is formed, the growth of the community in Bulgaria and within the international research of the mediaeval philosophy. The text is focused not only on the work of the school – translations, issues, critic texts, conferences, projects, teaching – but also on its two main characteristics: the condition, that the mediaeval philosophy is studied in its own philosophical and cultural value, and the fact, that the school implements a „mediative translation” between the two great cultural spheres within Mediaeval Christian Europe – the eastern Byzantine and the western Latin philosophical and cultural traditions.