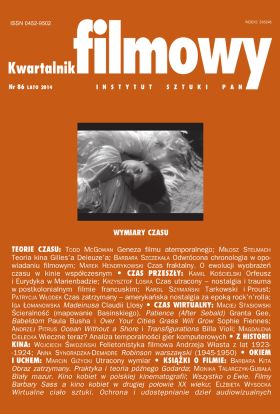 Summary/Abstract: The aim of the article is to describe and problematize the phenomenon of reverse film narration. Films such as "Happy End", "Betrayal", "Two Friends", "Peppermint candy", "Memento", "5x2" or "Irreversible" use the technique of the reverse sequence of events in different ways. Its role is not only the stimulation of the reception by the audience, but also a redefinition, or perhaps deconstruction of genre conventions and forms of viewer’s identifications with the protagonist. The structural innovation and self reflexivity of these films mean that their interpretation must also consider fictitious experience of time (Ricoeur). The author reflects on reverse narrative from the perspective of historical poetics and forms of reception. The article contains an analysis of ways in which reverse sequence chronology presents epistemological matters and the opposition between the future and the past. The analytical context for the article is provided by the tools developed in narratology (Mieke Bal) and neoformal-cognitive theory.