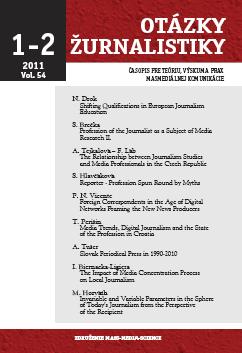 Summary/Abstract: This paper maps the Slovak media market in the segment of Slovak periodical press after 1989. New political, social and economic condition meant a completely new environment as well. Major influence was the early reform of the 42-year old Press Law adopted in March 1990 that has started important changes in the publishing of periodicals. Stagnation of the communist system was replaced by dynamic media market that has allowed expansion: more titles were being published, registration was made easy, as well as allowing private enterprise in the media area. As a result, offer of printed periodicals expanded to around 1500 new titles being published today.