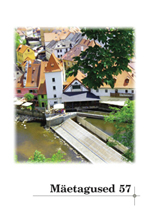 Summary/Abstract: The earliest grave markers on the territory of Estonia are trapezium-shaped grave plates from the 13th-14th centuries – they show different symbols but usually no text. Gravestones in churches mostly date back to the 14th-17th centuries, but usually no Estonian names appear on them. The oldest partly preserved grave monuments bearing Estonian names are wheel crosses in churchyards in Northern Estonia, mainly originating from the late 16th century and 17th century. These are masterful monuments with fine finishing, bearing fragments of texts from the early period of written Estonian language. Regarding the frequency of their occurrence, wheel crosses are rather rare grave monuments which could not have been afforded by just any peasant. The texts on them were in German or Estonian, also some in Latin. In addition to names and dates, the text include information about the family, their trade and parentage, village names and other facts. Texts on these crosses gives information how literate were the masters who made them. In order to understand wheel crosses more fully, their art historical, ethnographic and religious background must be considered in addition to their linguistic aspects.