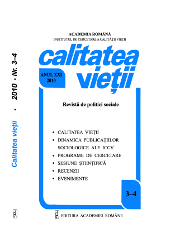 Summary/Abstract: The article discusses two phenomena of discrimination at work, which are relatively new in social studies area: mobbing and bullying. Mobbing is studied in some European countries: the Nordic countries, Britain, France, Italy, Spain since 1990, and is mainly related to actions of intense psychological pressure, made upon an employee to determine him to leave that job, given that his dismissal would attract legal problems on the employer. The employee who "has to be removed" can thus long-term bear injustice and humiliation, designed to reach the point in which he quits that job. In Romania, although the phenomenon exists, there has not been a public discussion until this project implemented by IQLR and its partners.