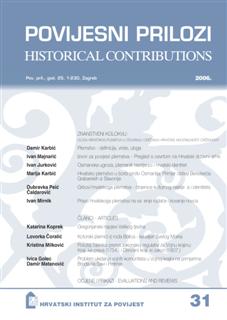 Summary/Abstract: In the thirteenth and fourteenth centuries various Croatian viceroys (ban) struck silver denars and obols in the name of the Arpadian and Angevin kings. Some issues are marked with the initials of their names or animals from their coatsofarms. Between 1302 and 1312 Paul Šubić of Bribir (d.1312) issued Venetian imitation grossi in his own name and the name of his brother Mladen I and later his son (Mladen II). Various Croatian nobles were granted the ius minerarum and the ius cudendae monetae in the course of the fifteenth and sixteenth centuries. Frederic II and Ulric II of Celje (Cilli), Princes of the Holy Roman Empire, by special permission of their kinsman Emperor Sigismund I, issued pfennigs between 14341456. Their former condottiere John Vitovec de Gereben (d. 1469), another Croatian Viceroy, too was granted the same privilege by Frederic III in 1459 and now we are in possession of his silverlings, struck at Krapina in Croatian Zagorje. Wladislaus II of Hungary, on the other hand, in 1441 permitted Paul I Banić (Bánffy) of Lower Lendava (Lendwa) to strike coins after Viennese pfennigs. Paul Banić and his son John are thought to have issued «Schinderlinge» after 1453. Count John of Krk was granted the mining right by king Sigismund on 11 November 1392. Count Stephen III Frankopan of Krk and Modruš received the minting privilege from Frederic III in 1443, though no coins of his have been found so far. Nicholas of Ilok issued denars between 1471 and 1477 as the last, but only titular king of Bosnia. Bosnian bishop Michael Kesereö and Chamberlain John Zerechen were permitted to mint coins in Osijek by Louis II in 1524. Already the Romans must have exploited the iron and silver ore (Limonite, Galenite) in the area of the Trgovska Gora and Gvozd, possibly already known in Prehistory geologists have been interested in the area since the 18th c. The grey Gvozdansko Castle, now a sad, yet impressive ruin, must have been built in the second half of the fifteenth century, probably after 1463, when King Matthias I. Corvinus (14581490) granted Count Peter II of Zrin (*1435 +1493) the mining rights. The castle, constructed for the defence of the town below it and of the mines against the Turks, is first mentioned in 1488. Nicholas III of Zrin and his son Nicholas IV frequently came to Gvozdansko in order to inspect the mines and the mint. A document from 1525 tells us that two miningmasters from Zvolen were sent by King Louis II to the area in order to improve the technology. The castle came under attack many times and was finally taken in January 1578. When the Turks entered they found all the defendors dead of wounds, hunger and cold. The Bosnian FerhatPasha was so moved by their bravery that they were conceded a Christian burial and the local population freed from taxes. Nicholas III Zrinski struck coins between 1521 and 1533. We ignore how and when this right was issued first, but his earliest denars bear the y