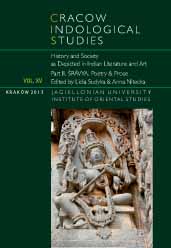 Summary/Abstract: Kausalya Baisantri authored a Dalit woman autobiography in Hindi—the first to my knowledge—in 1999. The article draws on the ‘narrative self’ concept as the theoretical apparatus for the analysis of the text’s content and context. The history of the autobiography genre in Hindi overlaps with the beginnings and advancement of prose in pre-modern and modern literature in these languages, which developed at the end of the 19th and the beginning of the 20th century. Autobiographical motifs predominate Dalit writings, due mostly to the fact that Dalit literature per se is viewed both by the authors as well as by the readers as a strong manifesto of an exploited people’s struggle, voiced by the oppressed themselves with the purpose of enforcing social change, it is perceived as a weapon to fight oppression of the upper castes.