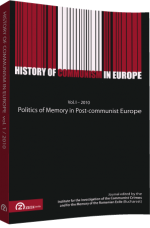 Summary/Abstract: During the communist regimes art was both a reflection of the political (politicized art), a critical reflection and partially at least a replacer of politics. At the moment of transition to democracy the watchwords seem to be: concord, consensus, forget the past, look to the future, build the future, and so on. Paradoxically enough, once the process of democratic consolidation is set in place, the societies – that seem/desire to have been created at the exact moment when the regimes change their names from dictatorship to democracy – begin to look to the past. Romanian post-communism has thus also seen slowly the desire to recuperate a lost past and it is only in the years 2000 that what I call “art of memorialization” is seen developing. The reclamation and reinterpretation of past symbols and the evocation of the previous period as a means of healing still present wounds is seen in different artistic supports and is somehow situated between legacy and nostalgia. The question I address is: What and how do we artistically remember? Are there patterns, symbols, common elements that appear in artistic discourses; how are these perceived by the public, what is their impact. Thus, I explore the question of artistic invocation of the past – as a means of construction of an artistic memory (art of memorialization). For that I shall address the discourses of Romanian visual artists (Vlad Nancă, Dumitru Gorzo, Dan Perjovschi) and the most important films part of what is called the “Romanian Nouvelle Vague” and which include: 12:08 East of Bucharest (Corneliu Porumboiu, 2006), The paper will be blue (Radu Muntean, 2006), How I spent the end of the world (Cătălin Mitulescu, 2006), Tales from the Golden Age (Cristian Mungiu, 2009). Although taken as a corpus, these films have quite different standing points on the communist period. I will also compare this recent new wave of Romanian cinema to the earlier look of Romanian cinema onto reality, the cinema of the early 1990s. Moreover I intend to take into account official attempts to artistically memorialize: public monuments, statues, public places and parks, museums and discuss the “why” of the absence of a Museum of communism in Romania.