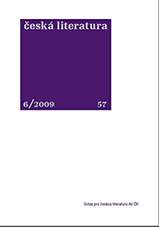 Summary/Abstract: This essay, written for the Czech translation of Edward Said’s (1935–2003) Orientalism (1978), explores ways in which to apply Said’s concept to Slavic Studies. The author points out two key features. The first, the concept of ‘self-Orientalization’ (which the author uses in this context), indicates that Slavness (unlike Orientalism) is an activity developed chiefly within the community it relates to. Second, the concept signals that in certain circumstances among Slavs as a whole strategies develop that ‘Orientalize’ the individual parts among themselves (for example, the relations between Russian Slavdom and ‘south-central-European’ Slavdom). The author offers two examples in support of his premise: one, a contextual interpretation of Pushkin’s Klevetnikam Rossii (To the Slanderers of Russia, 1831); the other, an interpretation of intra-Slav tensions and the thematization of Slavness, which appeared during the preparations for the Slav Congress of 1908. In conclusion, the author states that the general inspiration of Said’s concept consists in the interdisciplinary exploration of the ways in which these ideas were formed, who formed them, and what was the longterm result.