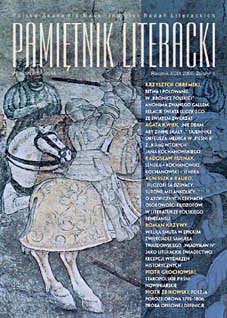 „Zstąpił do piekieł, trzeciego dnia zmartwychwstał”? – glosa do „Historyi o chwalebnym zmartwychwstaniu Pańskim”
“He descended into hell. On the third day he rose again”? – a Gloss to “The History of the Glorious Resurrection of Our Lord”

Summary/Abstract: The aim of this paper is to point out the inversion of the Easter events in the Polish sixteenth-century mystery play "Historyja o chwalebnym Zmartwychstaniu Pańskim [The History of the Glorious Resurrection of Our Lord]" allegedly by Mikolaj z Wilkowiecka). In the fourth scene of the play the Harrowing of hell is presented. It is usually believed that Christ descended into the underworld between his death on the cross and the Resurrection. In "Historyja," however, Jesus first rises from the dead, then he descends into hell to harrow it and to rescue his faithful. Such a sequence of events contradicts the widely accepted chronology of Christ’s redemptive work and, to the best of my knowledge, has been overlooked hitherto by Polish scholarship.