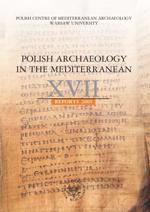 Summary/Abstract: Excavations of the site of Es-Sadda 1, while a salvage project par excellence, were planned as a multidisciplinary research program including a study of the ancient population, the mortuary practices and material culture of a Post-Meroitic community. Two seasons were carried out in 2005: in January and in November. The spring season was dedicated to identifying the differences between the six grave clusters followed by a detailed exploration of all tombs from a selected group. The result was a classification of burial forms, reflecting a division into a number of categories. Research was continued in the fall with a survey of the area situated west of the tumuli in Group I. In over a half of the tumuli, animal skeletal remains were uncovered, including post-consumption remains of goats and fragments of a dog skeleton.