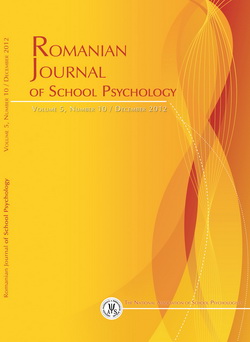 Summary/Abstract: Domestic violence is a topic of interest to specialists in various fields because of the effects it has on all those involved. Several recent studies draw the attention on the children witnesses of the situation in which the mother is assaulted by her partner. The paper presents a comparative study aimed to reveal the attitudes towards aggression of those children who were exposed to domestic violence against their mothers. The participants – 86 children aged between 9 and 11 years, 43 of which came from families where the mother was abused by her partner, and 43 children belonged to families with no history of violence – responded to the items of a measure designed by the researchers. The measure presents children several scenarios and asks them to choose a type of action in the register of assertive, passive, or aggressive responses. Comparisons show a higher tendency of children exposed to domestic violence to enact in an aggressive manner in a frustrating situation; when they witness violence against peers the intention to adopt a passive reaction is higher, coupled with lower levels of assertiveness. The results are discussed starting from relevant researches in the field and the possible long term effects of child’s exposure to domestic violence.