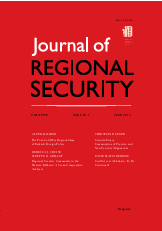 Summary/Abstract: Contemporary global and regional security relations are no longer predominantly characterized by formal organizational structures, but increasingly made up of informal and often diffused problem centered alignments. Following the hypothesis that new security problems produce new forms of security alignment, I scrutinize in this paper how one problem, maritime piracy, is addressed by different forms of alignments. I outline a perspective of how to study the range of new forms of security alignments which have risen to counter piracy. Investigating the United Nations contact group, the military mechanism SHADE and two regional agreements I argue, firstly, that these new forms of security alignments are glued together by notions (or better boundary objects) of best practices, information sharing and training. Rather than formal institutions, the alignments are best understood as organized around practical activities which revolve around projects of creating a common repertoire of knowledge, a joint epistemic infrastructure and shared practices. Secondly, the cases indicate that new alignments produce new (cognitive) regions which can be observed through the spatial practices underlying them.