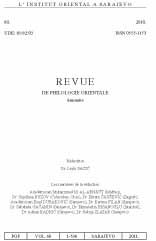 Summary/Abstract: This paper tries to examine the biographies on the basis of Ottoman and Western sources and it tries to assess the historical role of one of the lesser known Bosnian sanjakbeys from the first half of the 16th century, Ulama-bey, who was, at the same time, one of the most significant persons for the final consolidation and stabilization of the Ottoman rule in Slavonia in the middle of 1552. The paper also brings some new data and it makes some small corrections to the conclusions of the older historiography, especially in the field of chronology. Ulama-bey held the position of the Bosnian governor from 1541 to 1547. Then for two years he was the governor of the sanjak Erzurum, and then he returned to Europe and held a position of Požega sanjakbey from 1550 to 1553. During his governorship in Bosnia and in Anadolia he did not leave such a significant mark as his much more famous predecessor Gazi Husrev-bey did, but the Ottoman military successes in Slavonia, under his leadership, demand greater attention to be paid to this Ottoman governor and army commander.