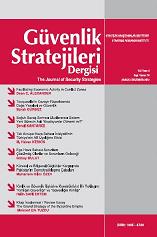 Summary/Abstract: This study discusses the main parameters of the power struggles during the Cold War and the structure of the post-Cold War international system. In that context, the views of the post-Cold War era as “the New World Order” and the unipolarity and multipolarity theses are also discussed. Besides these, the opinions of Zbigniew Brzezinski’nin and Samuel Huntington’s theses, which caused comprehensive debates, are also evaluated. By doing that, the study aims to show empirically that the new international system after the Cold War has shifted towards a multipolar structure – in light of the most recent developments- based on the structural realist assumptions, and also this study claims that the new process should be called “the period of coalitions.”