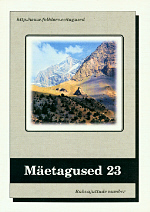 Summary/Abstract: Cyrillus Kreek (1889-1962) was a leading promoter of the Estonian choir music (also a well-known composer, conductor and music teacher), whose work focused largely on ethnomusicology. His interest in folk music lasted from his university years to the age of a mature scholar. The present article discusses C. Kreek's contacts with the Estonian Swedes and their folk music, which have previously been overshadowed by the Estonian folk music in the earlier studies on the composer's works. Shedding light on these aspects helps to explain the composer's interest towards the collection of the Swedish folk music in 1921, at the time, when the collection of the Estonian tradition was a priority in folklore. The article is divided in three subchapters: Cyrillus Kreek and the collection of the Estonian folk music; Cyrillus Kreek, the Läänemaa County and the coastal Swedes; and on the 1921 collection expedition of Cyrillus and Maria Kreek among the Estonian Swedes. C. Kreek joined the collection team of the Estonian folk tunes (the head of the team, which was active during 1904-1916, was Oskar Kallas) only in 1911, but he quickly became an enthusiastic collector. It is worth noting that he was successful also in Läänemaa County in western Estonia, which was considered somewhat problematic because of the numerous religious movements and sects in the region. Apart from having good communicative skills and a witty sense of humour, he was successful in establishing good contacts with his informants also due to the popularity of his father, a lifelong school teacher in the region. In 1914 C. Kreek was the first Estonian to use phonograph in folkloric collection work. The period of wars in 1915-1919 (the First World War, the War of Independence) interrupted the collection work. For him, the 1921 collection expedition remained the last expedition that was organised and financed by the Estonian academic and education circles. His later, self-initiated recordings of folk tunes were made in Rakvere and Haapsalu. During 1923-1932, while working as a music teacher in the Läänemaa Teachers' Seminar, his students helped him with the collection work. C. Kreek's total contribution was approximately 1300 recordings of folk tunes. After the 1930s he copied folk tunes from the folklore archives in Tartu and the materials collected by his acquaintances for personal use. His personal collection of folk tunes consists of nearly 6000 recordings. Läänemaa County was the home of C. Kreek and of many generations of his ancestors. Cyrillus Kreek himself lived there for most of his life, including the period of professorship at the Tallinn Conservatory. In his youth he was actively involved in the music life of the county, organising concerts, the Läänemaa song festivals, etc.

"Ambroosius on ladna mees..." Ühest jõuluteemalisest külalaulust "Ambrose is a great fellow..."' On a village song on Christmas theme 1999 Eestlaste kiigekultuur enne ja nüüd Swing culture of the Estonians in the past and today 2003
2022 © CEEOL. ALL Rights Reserved. Privacy Policy | Terms & Conditions of use
ICB - InterConsult Bulgaria core ver.2.0.0815