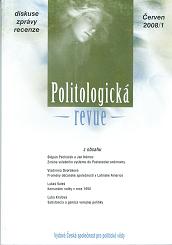 Summary/Abstract: The article focuses on reforms of the Czech electoral system with special regard to current government’s draft proposal of another substantial change of the electoral formula. Based on the recounted results of the 2006 election to the Chamber of Deputies, it analyses basic characteristics of the electoral system and its influence on the party system representation and possible formation of a stable majority government. Outcome of eventually reintroduced Hagenbach-Bischoff electoral formula with a bonus for the winning party and with the actual shape of electoral district unaltered is simulated. The results are consequently compared with the alternative application of the D’Hondt formula, this time on the unique electoral district comprising the whole Czech Republic. The authors argue that the latter electoral system would also produce governmental majority and, simultaneously, would lever out the existing disproportion of electoral districts’ magnitude that harms small parties and contributes to serious distortion of the electoral system proportionality given by the Czech Constitution.