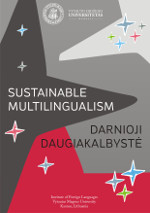 Summary/Abstract: The spreading of few ‘powerful’ languages to the detriment of numerous ‘weak’ languages has led to the endangerment of many idioms, a process caused by three main factors: linguistic imperialism and globalization, the language policies traditionally adopted by nation-states, and language shift. Some theoretical frameworks justify the impoverishment of linguistic diversity according to an instrumentalist viewpoint, while others support linguistic diversity. Two documents by UNESCO, for instance, underline the importance held by languages in relation to the I(ntangible) C(ultural) H(eritage), not only as vehicles of culture, but also as part of the ICH themselves. Other theoretical frameworks stress the importance of linguistic diversity according to both an ecolinguistic perspective and a rights-oriented approach. From these starting points, the expression ‘ecolinguistic capital’ is proposed to designate that particular intangible capital by implying an anthropocentric view, and composed of three interrelated elements: languages, individuals and places.