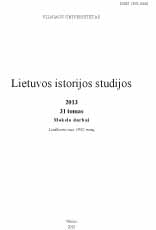 Summary/Abstract: The object of this publication is the transatlantic flight of Stephen William Darius and Stanley Girch, two American pilots of the Lithuanian descent (widely known as Steponas Darius and Stasys Girėnas), which is considered to be one of the most popular subjects of the Lithuanian national memory and one of the biggest national narratives of the 20th century. The flight ended up tragically: the plane “Lituanica” crashed in Germany, close to its eastern border (now the territory of Poland) on July 17, 1933. The aim of this article is to stress the meaning and to clarify the character of the official reactions of three countries, which were directly involved or linked to the flight, crash, and death of Darius and Girėnas: the United States (the country of their citizenship), Germany (the country where they crashed), and Lithuania (their country of origin, to which their remains were brought). A special emphasis is laid on two official investigations which were initiated and completed by the German and Lithuanian authorities immediately or shortly after the crash (nothing is known about the involvement of the American side). The study has shown that after the crash the status of the “Lituanica” flight was changed at a dash from public topicality to state interest in Lithuania (apparently for political reasons). And yet, the further tendencies (incomplete or questionable findings of the Aviation Commission, the permanent lack of reliable information, constant rumors spread by the opposition media, documentation classification, delayed or failed commemoration initiatives, etc.) revealed that Lithuania’s de jure commitment to take all responsibilities was de facto “mission impossible”. The sharp contradiction between Lithuania’s declared aim and actual gain was influenced, if not determined, by the complex conjunction of the strategic interests and touchy issues of the interior and foreign politics of the three different countries at the time. The reason for this article was the fact that no adequate international archival research was carried out before and no profound studies of the political and juridical aspects of the “Lituanica” crash (and its complicated extended aftermaths) were ever published in Lithuania or abroad. This study is considered to be the basis for the further and broader on-going research in Germany and the USA.