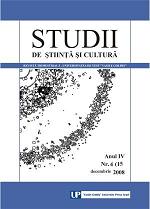 Summary/Abstract: The purpose of this article is to outline the contribution of the Romanian literature in general and of Transylvanian one in particular to the development of European spirituality. The comparison between the country life novels written by the Romanian author Ioan Slavici, representing the Romanian Western Plain, and those of Bjørnstjerne Bjørnson, Norwegian author of the same period, is a clear proof of the relationship existing between the two literatures, the Eastern- European and the Northern one. Through their works, the two writers present the spirituality of their native countries, with emphasis set on the life of Romanian and Norwegian peasants, willing to make themselves noticed and to prove their intellectual qualities. Two significant novels in this sense are “Budulea Taichii” by Slavici si “A Happy Boy” by Bjørnstjerne STUDII DE STIINłĂ SI CULTURĂ ANUL IV, NR. 4 (15), DECEMBRIE 2008 54 Bjørnson. The peasant is presented as willing to fulfil his dreams, to prove his talent and to create a better position for himself and his family in the society of the 19th century.