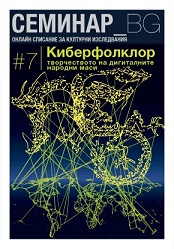 Summary/Abstract: The present paper analyses the video parodies of the film “The Downfall” as an exemplary case of digital folklore. We explore who is the ‘folk’ that produces video memes, tracing how the very notion of folk and the boundaries of folkloristics have changed in the last two centuries. The paper focuses also on the problematic distinction between high culture, mass culture and folklore nowadays in order to show that they are governed by the same aesthetics based on variation, intertextuality and transmediation, and on the shared concern about the loss of authenticity. Following Agamben’s notion of profanation, we claim that video memes are one of the few examples of true profanation, experimentation with form and meaning, and destabilization of official discourses, which escapes the pitfalls of property and is done ‘just for the lulz’. In the parodies of Hitler, history is recreated and power is subverted through the naughty, meaningless, playful power of laughter.