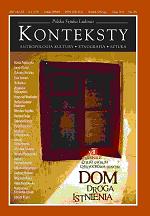 Summary/Abstract: The text broaches the topic of the home in the oeuvre of WItold Gombrowicz not in its spatial aspect – as amicrocosmos whose order corresponds to that of the world, while consecutive spaces possess symbolic pro- perties and ahierarchic value – but the temporal aspect, in order show that the family home, the chil- dhood home, is an impossible place, and that retur- ning to it is doomed to fail. The author compares Gombrowicz’s drama Ślub (The Wedding) and auto- biographical Dziennik (Diary) – both treated as litera- ry texts; everything that we can learn from them abo- ut Gombrowicz pertains to the literary figure of „WI- told Gombrowicz”. The instrument that is to assist our analysis is the Freudian category of das unheimli- che, endowing identity and aspecific structure to the return home and, simultaneously, the return to one- self. The „uncanny” is both alien, menacing and fami- liar, areturn to that which is closest and disturbs the certitude of the subject’s power. An analogous struc- ture is indicated in the texts by Gombrowicz: fragran- ces recognizable from Małoszyce and returning during ayearly sojourn in Germany indicate death. In the world of Gombrowicz, which, as M. P. Markowski re- called recently, begins with a„double association”, birth and youth must be paired with death, present, however, not at the end but from the beginning, and not according to the principle of Gombrowicz-style oppositions but the Freudian heimlich-unheimlich, con- tained in asingle word.