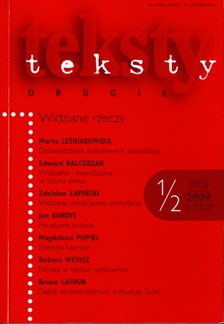 Summary/Abstract: This article is a polemic with a postcolonial interpretation of Joseph Conrad’s "Heart of Darkness" – namely, with the images of black dwellers of Africa as criticised by Nigerian author Chinua Achebe. As is made apparent through a careful analysis of the text, while not denying the sense of strangeness against ‘the savage’, Marlow makes an effort to understand their otherness as well as, and primarily so, his own response to how the Other behaves. The theme of a sarcastic story is therefore not aborigines but rather, the white invaders of Congo territory and their attitude to the local black people. Marlow’s fascination with Kurtz, “the most outstanding amongst the daemons of this country", has led the captain to conceal his cruelties committed against colonial protectors and his fiancée. Marlow is tormented by these lies, his story, being told to fellow-travellers in another trip, is a sort of catharsis to him. Marlow, a noble man, positions himself as a coloniser whilst his irony turns into a self-irony. This obviously does not mean that an idea of colonialism is advocated by Joseph Conrad, the one who has created Marlow – the piece’s narrator and lead character.