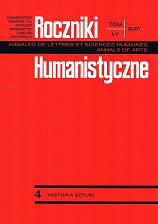 Summary/Abstract: After the First World War Chełm was an abandoned and destroyed town. It had gone through similar vicissitudes as many towns and small towns of the former Russian partition. In the inter-war period Chełm was the seat of local administration and a housing estate with a new urban structure was built there, the facts that considerably affected the economic development of the town in the inter-war period. In the years of 1928-1939 a big investment was carried out in Chełm, the urban plan called “New Town”. This paper discusses the history and construction of the railway housing estate in Chełm, the largest investment of the inter-war period in eastern Poland. Today it has been written in the register of monuments as an interest architectonic urban planning. The backdrop has been outlined mainly on the basis of press articles. They show how local communities from Chełm and its authorities was committed during the construction. The historical part of the paper shows the rank and grand scale of the new initiative. The conception and plan of urban planning are presented on the basis of the design of the “Head Office” of 1926 whose authors were the architects Adam Kuncewicz and Adam Paprocki. The blueprint of the construction is a starting point for the analysis and evaluation of architectonic and urban planning values. The paper includes also the third architect Henryk Gay who designed the main building for administration. The text of the paper outlines the character of urban planning and describes particular types of buildings, draws the attributes of national style, and in particular marks the presuppositions of manor style. It is an attempt to explain the idea of the town-garden in Polish urban planning and to transplant it onto eastern territories. The urban and architectonic design that was carried out in Chełm is an interesting example of the national style (manor style) in its approach to towns-gardens.