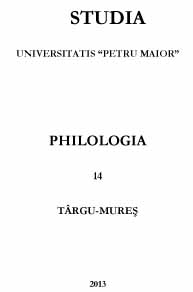 Summary/Abstract: This study follows the evolution of two conceptual models - the habitat and the anthropocentric model - which founds the medical metaphor of Greco-Latin origin used in the English medical terminology and the Neo-Latin languages. It also follows the complex relationship between terminology, etymology, semantics and the natural languages - through a contrastive analysis of the usage and of the context - in the English, French and Romanian language. Out of the two models the habitat is the one which has generated the most conceptual parts in medicine, especially in Nomina Anatomica. There are specific divisions within both studied models with an impact upon the conceptual-semantic dynamics and upon the unity of holistic vision: “the interior” of the Greek and/or Roman house is the favourite metaphor for “the interior parts of the human body” Gr. θάλαμος,-ου; Lat. cellula, ae; Lat. trabecula, ae etc); the metaphorical model of “the linking elements between the components of the Greek and/or Roman home” has become the model of anatomical “relations” between parts of the human body (Lat. atrium, ii). Three are the conceptual subsystems of the “anthropocentric model” based on which the medical metaphor of Greco-Latin origin is developed: man and family; parts of the human body; sensations.