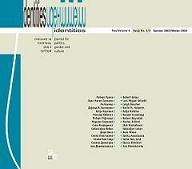 Summary/Abstract: Gilles Deleuze once said philosophy is about the invention of concepts. On other occasions, he also recommended to investigate and deal with the possibility of geophilosophy, described as a practice of thought deeply concerned with the material conditions of its context and of its taking place. To him in fact, critical theory was to fulfill an important role in contemporary society only if it was to relate itself to the specificity of a local space and a political option.