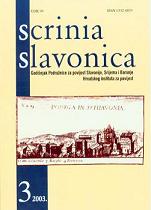 Summary/Abstract: Ferdo Šišić was the representative of people in the Croatian Parliament for two terms of office: in the period from 1908 – 1910 and 1910 – 1911. He was elected in Vinkovci polling district, but he was not on the same list twice. Namely, in 1908 he was the representative of the Croatian-Serbian coalition and the second time he was a candidate on the Government’s list. The situation in Vinkovci at that period made him change his mind, because having witnessed his cooperation with the Government, the Croatian-Serbian coalition nominated Gustav Gaj, a nephew of the leading figure of the Illyrian Movement in Croatia. Although Šišić was reproached for disregarding his duties towards his voters as their representative in Vinkovci, his activities at that time were, if we take a deeper look into them, extremely productive, despite his opposition to the Government and the Government’s programme. As the member of the Education Committee, he brought forward many interesting proposals for promoting the education system in Croatia for the period of both of his terms of office and made a great contribution to it. He also advocated the use of the Croatian language in the general Parliament. After the civil governor Tomašić had decided to abandon politics and having realised the uselessness of his own dedication in a situation full of national disagreement, Ferdo Šišić decided to abandon politics himself.