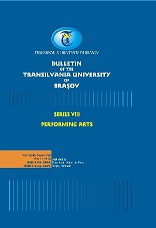 Summary/Abstract: The Romanian carol is still enjoying a great popularity, appearing as a great variety of customs, traditions and faiths transmitted from generation to generation. The customs called Pluguşorul and Semănat are part of the winter repertoire and take place between 24 December and 7 January, belonging to the carol genre. The customs related to the archaic plowing and sowing are some of the oldest and most beautiful Romanian traditions, pursuing to assure - through imitative magic - the abundance and welfare of the Romanian villages’ inhabitants. Their origins get lost in the darkness of history – coming probably from the Thracians, Agathyrsi (the Dacian’s ancestors), and Getho- Dacians, whose musical talent was mentioned by the great scholars of those times. While Pluguşorul (Little Plough) and Plugul Mare (Big Plough) are practiced on New Year’s Eve, Semănatul (Sowing) takes place on the following day, on Saint Basil’s Day, marking in this way the beginning of a new agricultural year, through magical acts meant to trigger the earth’s fertility. The organization in groups, the ritual, the structural elements (lyrics, melody, rhythm, ambitus, archaic sound systems), the props (petadou /friction drum, oxen, plough) suggest the whole unfolding of the agricultural works in the rural archaic communities, starting with plowing, sowing, reaping and grinding of the wheat out of which the bagels that reward the carol singers are made. The melodies of the Pluguşor (Little Plough) (Muntenia), very similar to those of the Christmas Carol, highlight, from all the perspectives, the belonging of these ceremonials to the archaic Romanian spirituality stratum: simple melody, low ambitus, prepentatonic and pentatonic music scales, slow rhythm, giusto-syllabic in character, tetrapodic versification system, with or without refrain.