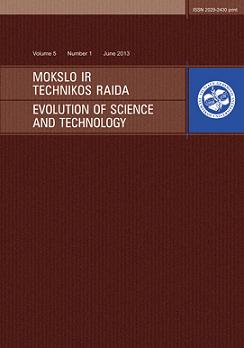 Summary/Abstract: Antanas Smetona (1874–1944), an active member of the Lithuanian Scientific Society (LSS) since its establishment in 1907, left a remarkable trace in the development of education in Lithuania. As President of the Republic of Lithuania he opened Pedagogical Institute in Klaipeda under the presidential order of September 18, 1935. A. Smetona’s input in creating Lithuanian schools at the beginning of the 20th century and preparing school textbooks is evidently significant. In autumn 1915 the Lithuanian intelligentsia elected the new board, i.e. Textbook Publishing Board (TPB) at the LSS, and invited a lawyer and writer of journalese articles A. Smetona (one of the LSS’s founders) to join the TPB. He was assigned to be in charge of preparing of one of the most difficult textbooks, i.e. textbooks of arithmetic and algebra for high (secondary) schools. The success of A. Smetona’ s work, namely, publishing theoretical books and textbooks of arithmetic, is evident in the LSS‘s activity reports and in A. Smetona’s bibliography by Kisinas. “Textbook of Arithmetic Theory” (1916), also known as “Short Textbook of Arithmetic”, the second edition – “Theory of Arithmetic”, was the first A. Smetona’ s textbook on arithmetic which got acknowledgment and had even seven editions. In writing the textbook A. Smetona followed Petersburg’s German school teacher Masing’s textbook in German. In 1916 A. Smetona prepared another publication on mathematics, i.e. two-part “Textbook of Elementary Algebra” (also known as “Textbook of Algebra Theory”) which was the translation of the Russian textbook on algebra written by teacher Jakov Blumberg from Mintauja Gymnasium, where A. Smetona was taught. However, this textbook did not gain popularity. Under unfavourable conditions (the war going on, the part of the intelligentsia moving abroad) Lithuanian teaching aids on different subjects including arithmetic and algebra for high (secondary, gymnasium) schools were published. A. Smetona who was not a specialist in mathematics successfully completed the task and prepared (or translated) textbooks of arithmetic and mathematics theory which were necessary for Lithuania at that time. Similarly to other national textbooks on different subjects, textbooks of algebra and mathematics were prepared quickly, without standard Lithuanian terminology which caused didactic and linguistic inaccuracies. It is preferable to evaluate these textbooks from historical point of view. Firstly, there was an attempt to standardize the Lithuanian terminology of arithmetic and algebra. Secondly, the textbooks had influence on the development of both teaching mathematics and education in Lithuania in general. Alongside with the other LSS textbooks, the textbooks of arithmetic and algebra paved the way for national school and culture.