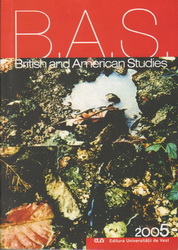 Summary/Abstract: The paper considers Samuel Beckett’s Trilogy and Lawrence Durrell’s The Alexandria Quartet from the perspective of volatile body representation. While in Beckett, we deal with a single volatile body, assuming distinct identities, in Durrell, we have a multiplicity of characters, each showing a series of facets brought to surface by different circumstances in their lives. The theories used in my analysis are Jacques Derrida, René Descartes, Alphonse Lingis, Gilles Deleuze and Félix Guattari.