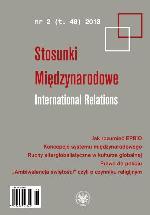 Summary/Abstract: Diversity of interactions between religion and different aspects of international relations has been gaining importance as a part of the discussion on „resurgence of religion” in the international scene since the last decade of the 20th century. Ambiguous infl uence of the religious factor in the area of international relations has become the topic of numerous analyses, in which both positive or negative potential of religion is presented, though rarely both dimensions are seen as two sides of one phenomenon. In most cases the authors stress the dysfunctional role of religion in contemporary international relations referring to such issues as confl icts, fundamentalisms, terrorism. Signifi cantly fewer analyses are focused on the functional role of the religious factor in the confl ict resolution and building peace. The purpose of the paper is to point out the multidimensional infl uences of religion in contemporary international relations based on the concept of the „ambivalence of the sacred” proposed by Scott Appleby, which seems one of the most interesting explanations of the „Janus face of religion”. In the paper different models of relations between religion and politics are presented, as well as such crucial phenomena referring to religion as ethno-religious confl icts, religious fundamentalism, religious terrorism, but also religious contributions to peacemaking and peacebuilding.