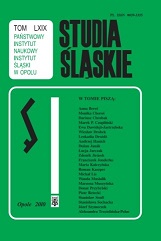 Das Phänomen der Sprachinsel. Geschichte der ehemaligen deutschen Sprachinseln in Oberschlesien und Galizien
The phenomenon of a language island. The history of the former german language islands in Upper Silesia and in Galicia

Summary/Abstract: The article constitutes a historical analysis of a series of language islands, which for the most part have already ceased to exist. The paper starts with an attempt to define what a language island is. Further on, an overview is presented of the development of German language islands with consideration given to various aspects (historical, territorial and political) which affect the existence of language enclaves. Both religious factors, linked to the emergence of centers of religious practice, such as monasteries, and political ones, impacting the migration of peoples and their settlement in historic Galicia, have been discussed. The mentioned dialectology allows for a thorough analysis of the cultural and linguistic aspects determining the structure of a language island and its operational specificity. Additionally, the history of settlement, together with its foundation and legal background, provide a closer overview of the first language islands which appeared in the defined historical territories, only part of which lie within the current borders of the present-day republic of Poland. The distribution of settlement groups, their division into different territories as well as the subsequent stages in the migration of settlers outline the area where German language centers were formed.