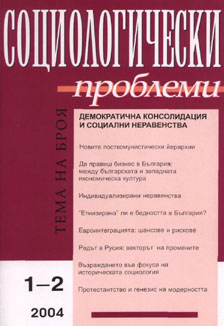 Summary/Abstract: The article is concerned with what has become an emblematic phenomenon of the transitional Bulgarian society and namely, corruption. To a varying degree, the problem is present in the remaining post-socialist countries as well, which is evidence of its universal validity as an essential characteristic of the transformation processes under way in the countries of Central and Eastern Europe. The article has two objectives: First, to outline a summarized theoretical model of analysis of corruption and its universal characteristics as a special type of social and ‘quasi-economic’ interaction. Second, to briefly present the methodology and some findings of the empirical surveys of corruption conducted in recent years by Vitosha Research Agency. Corruption is considered as a special type of social relationship, of a ‘secondary’ nature and arising in connection with, or on account of, other relationships: administrative, business, legal, or political ones. The ‘secondary’ corruption relationship occurs on an exchange basis and there is thus a process of ‘quasi-economization’ of the basic interactions, i.e., they are associated with a parallel exchange of money, favors, or other non-material benefits. This allows viewing the corruption relationship as a particular kind of ‘quasi-economic’ relationship, which on the one hand, is governed by certain market laws, and on the other, seriously deforms the market rules and the basic relationships that are the initial reason for making the corruption deal. Notably, the corruption relationship is regarded as illegitimate in the context of the predominant social values, is perceived as an abuse of public office and power, and is usually defined as a crime in the penal law. The article further attempts a typology of corruption-based interactions and their chief areas of proliferation. Empirical data from surveys of corruption are cited in illustration of the rate and forms of occurrence of corrupt practices, as well as of public attitudes to the phenomenon of corruption.