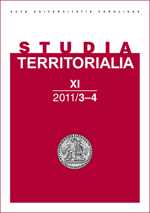 Summary/Abstract: Since the late 1980s, Italian historiography has reassessed the previous conventional perspective of Fascist anti-S emitism – allegedly imposed by Nazis, rejected by Italians as a whole and thus lacking impact. This paper focuses on very recent research, analyzing the situation of the Jews in Italy in the postwar years. The study of this period not only contributes to understanding the character and extent of the Fascist persecution of the Jews but also reveals the genesis of the lack of willingness to deal with the Fascist past in Italian society until recently. The paper considers the postwar myth of the “good Italian” to be one of the main factors which made the process of the reintegration of the survivors so slow and fraught with obstacles.