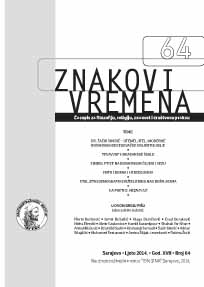 Summary/Abstract: There are two basic aims set by the author in this paper: the first, to show the demographic development of Bosnia and Herzegovina from the first census to the modern age, and the second one, to show the genesis of the development of the Bosniak national body, from negating, assimilating and genocide to the status of a political nation. That is how the Bosniaks underwent through various so called modalities imposed by various administrative-political structure, and all intended to destroy or assimilate of the Bosniak nation into the Serbian or Croatian body. With the departure of the Turkish rulers the Bosniaks were permanently branded as an “anti-people element”, that is, as a remainder of the Turkish oppressor, for whom Serbian and Croatian nationalists openly demanded: “With the Turks you arrived, with them you leave”. The unchanged relation with the Bosniaks continued with the new (Tito’s) Yugoslavia, in which the Bosniaks are subjected under various modalities: Serbian-Muslim, Croatian-Muslim, undeclared-Muslim. Such engineering surely was intended to assimilate the Bosniaks’ body into the Serbian and Croatian. That proved true at the next census in 1953, with the modality of Yugoslavundeclared, and in 1961 with a re-established modality of a Muslim (of Yugoslav descent), national (or better yet religious) aspect that remained unchanged until the First All-Bosniak Parliament in 1993 and first postwar census in 2013 where the Bosniak nation was officially acknowledged, after a centennial political struggle, suffered crimes and genocide: from the Austro-Hungarian Monarchy, World War I, Kingdom of Yugoslavia, World War II to the aggression on Bosnia and Herzegovina and genocide on the Bosniaks 1992-1995. It all shows how, in the demographic image of Bosnia and Herzegovina, the Bosniaks, as “the factor of disturbance” were tried to be destroyed, first through perfidious methods and then ethnic cleansing (genocide), which is clearly shown in this paper.