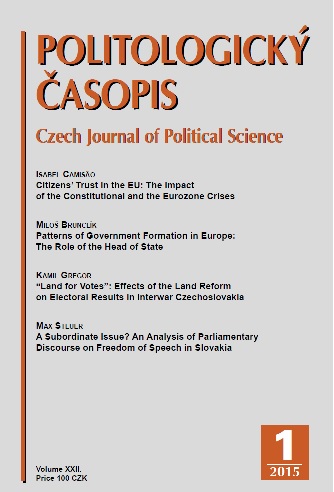 Summary/Abstract: This article estimates the effects of the Land Reform in interwar Czechoslovakia on electoral support for political parties in the 1925 parliamentary elections, focusing on the Republican Party of Farmers and Small Landholders (RSZML). It tests the ‘land for votes’ hypothesis that states the reform was designed and executed by the party to better its performance in subsequent elections. It employs multivariate linear ordinary least squares regression analysis of data aggregated to the judicial-district level of public administration to estimate the effects, controlling for other variables that affect electoral performance, such as the structure of the rural workforce, nationality and religion. A strong positive correlation is found between the share of land redistributed under the reform and the electoral performance of RSZML ceteris paribus, offering evidence in favour of the ‘land for votes’ hypothesis.