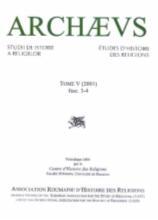 Summary/Abstract: This section offer some comments, from friends and collaborators, about the life and scholarly writings of Ioan Petru Culianu (Ia]i, 1950 - Chicago, 1991), a well known Romanian-born historian of religions, at the tenth anniversary of his tragic passing away. Culianu was a very noted specialist of different fields of the history of religions, but also an original thinker, interested in the system shape of religion, magic, and mind, and especially this later period of his writings is commented by a specialist in aesthetics, and by other in Jewish religion and thought and Mediterranean religions of antiquity.