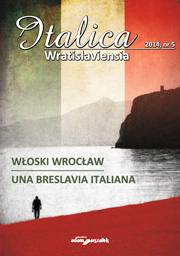 Summary/Abstract: The paper discusses some data about the name of one of the biggest cities in Poland, the capital of the region of Lower Silesia, Wrocław. The toponym has a long history which includes different periods of foreign domination: Czech, Austro-Hungarian, and mostly German. The origin of the name is perfectly Slavonic: it derives from the archaic personal masculine name Wrocisław. The name is characteristic for its double construction: the verb wrócić ‘return’ and noun sława ‘fame’ or verb sławić ‘praise’, that indicating somebody honoured for returning. The original form has been the subject of many international variations, e.g. the Germanic Presla, Presslau, and Breslau. The Latin adaptation of the toponym Vratislavia in combination with the Germanic Breslau is the most popular as the basis for the internationalization of the name, such as Breslavia in Italian and Spanish. Nowadays, the city has reason to promote its original Polish name. The social challenge of the city is to teach how its name is pronounced, using for example the linguistic hybrid Wroc-Love [vrotzlav]. The creation of some fantastic legends around the city and its name is also significant, increasing popular etymologies of this toponym. The onomastic discourse concerning Wrocław is a natural process of contemporary social communication on local, national and international levels including some antonomastic uses of this toponym: the city is called Venice of the North, and the Polish Prague. Even the Hitlerian catchword of Festung Breslau counts in this discourse of changing is historical meaning.