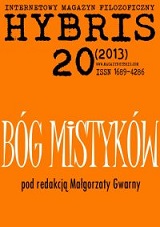 Summary/Abstract: The Fathers of the Church from the beginning of the Christian thought were under a strong influence of the Greek philosophy which was in this time understood mainly as the path to unity with the Supreme Being. Christian Apologists tried to convince in their apologies that Christianity is the true philosophy because it allows to reach its goal in the best and the most certain way. Apologists commonly claimed that thanks to the biblical revelation Christians have the knowledge of God which is the most perfect and accurate. We can observe such claims also in the writings of Alexandrian Fathers for whom God is somehow known even at the highest mystical experiences. The Christian doctrine of the knowledge of God changed radically in the fourth century AD in the writings of Cappadocian Fathers who defended the orthodox faith against the Arians. The most famous of them - Eunomius claimed that the essence of God is to be unbegotten. Basil the Great and Gregory of Nyssa answered him that we cannot know the essence of God and none of his attributes can be understood as his essence. The Cappadocian Fathers were the founders of the Christian doctrine of unknowability of God, and they formulated it in the precise philosophical language. They also made a great contribution to the further development of this doctrine. Dialectic arguments showed only one aspect of unknowability of God; another one was the darkness in the ultimate mystical experience. Gregory of Nyssa explained it well in his Life of Moses, but this teaching reached its ultimate figure in writings of Pseudo-Dionysius Areopagite - unknown author from the end of the fifth century AD. Pseudo-Dionysius claimed that the best knowledge which we can have of God is ignorance. The man can reach this knowledge only at the highest stage of mystical life at the apophatic way. The conclusion of this brief analysis of unknowability of God in the Patristic tradition is the statement that there were two main stimulants of its evolution: theoretical and mystical. For both of them the key role played the Greek philosophy which was an inspiration in creative explanation of the Holy Scripture made by the Fathers of the Church.