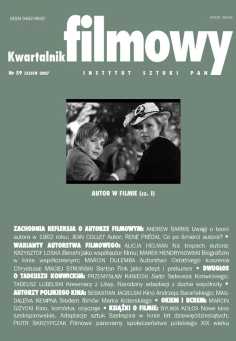 Summary/Abstract: Kaniecki argues in his essay that "Salto" heralds the most mature stage of Konwicki’s creative activity in which the correspondence of the components of his various works is based on the principle of complementing or self-interpretation and not – as in the case of "Salto" – on the principle of polemical dialogue. The writer-turned-director’s third film is a self-polemical dialogue towards "A Dreambook for Our Time". As Konwicki says he had elevated himself too much in the book, so he made the film to dissociate himself from himself. The novel-film relationship is built not only by numerous fictional parallels but also by the structure of the represented world. In "Salto" Konwicki drew on the poetics supported by means of expression that constituted the cinematic equivalent of his writing technique. Kaniecki focuses on the analogies between formal elements of the two works, which build the category of unreality and conventionality of the represented world and the status of the narrator-protagonist.