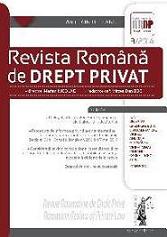 Summary/Abstract: The New Code of civil procedure provided, for the first time in our legal system, that, in the second appeal proceedings, the claims and conclusions of the parties can be lodged and defended only by the lawyer or, if appropriate, by the legal adviser, except the case in which the party or its attorney-in-fact, spouse or relative in the second degree of kinship, inclusively, has the degree of Bachelor of Laws. According to this text, in virtue of art.11 of Law no. 2/2013, as regards the courts and the prosecutor’s offices, the claims and the conclusions in the second appeal proceedings may be lodged and defended by the president of the court/chief prosecutor, by the legal adviser or by the judge or prosecutor appointed to this end, by the president of the court, respectively by the chief prosecutor. Far from being susceptible to criticism regarding the observance with regard to the access to justice, the legislative solution was compulsorily required. The New Code of civil procedure regulated the second appeal as an extraordinary and genuine remedy at law, having an accentuated technical nature, in which the retrial of the case on the merits is not intended, but also the verification of the extent to which the judgment ruled in the last degree of jurisdiction on the merits complies with the applicable rules of law. Hence, in case in which the second appeal may be lodged only for the reasons of illegality being expressly and restrictedly set forth by law and involving any debates on certain legal issues of substantive law and of procedure law, it may be exercised under any reasonable conditions and with actual chances of success only through the agency of a person who has legal education. Accordingly, the solution recently introduced in the Code is intended for the protection of the parties not having a legal education and – what represents a challenge of the entire society – for the improvement of the quality of the judicial process, for the increase of the efficiency of the legal system by avoiding the overpopulation of the supreme court, under the circumstances in which art.483 para. (3) of the New Code of civil procedure sets forth that “the second appeal intends to submit to the High Court of Cassation and Justice the examination, according to law, of the compliance of the judgment under appeal with the applicable rules of law”. The regulation of the New Code of civil procedure complies with the European Convention on human rights. In most part of the European countries, in their capacity as Member States of the European Union and parties to the European Convention on human rights, the legal assistance for the parties is required at least in front of the Supreme Court, or in certain cases, in front of the courts of first instance.