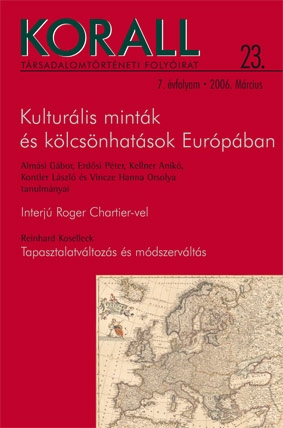 Summary/Abstract: At the beginning of the 20th century, during the last decades of the Habsburg monarchy, ‘Baroque’ was an alien cultural import to Hungarian national culture. It was related to Habsburg absolutism that opposed the nation’s struggle for political independence, and to the contrast between the Catholic Church, associated with the dynasty, and Protestantism as a driving force of political resistance. The fall of the Monarchy and the territorial disintegration of the Hungary after World War I brought about the rewriting of national history. The emergence of cultural history as a new trend in historiography and the impact of Geistesgeschichte prompted scholars to construct a Baroque period within a new cultural history of Hungary. Yet, their opinions regarding the issue whether or not such a period had been prosperous for the Hungarians, were biased by former ideological oppositions. Th e discovery of Baroque could be criticised because it seemed to be connected with the presence of a contemporary ‘Neobaroque’ mentality. Th e term ‘Neobaroque’ originally referred to the revival of the Baroque art forms at the turn of the century, infl uential in state-supported public architecture which created a pseudo-historical scene showing the greatness of the national past. Since this style survived long into the interwar period, remaining central to offi cial architecture, the term ‘Neobaroque’ could easily be turned into a key metaphor by the critique of the contemporary political and social system, exposing the emptiness and vanity of behaviour patterns, the servile reverence to power and the respect for illusory social values. Gyula Szekfű, a leading historian, labelled the society of the interwar period as ‘Neobaroque’ and stressed its inferiority to the great Baroque period of the 18th century which was his own historical construction. ‘Neobaroque’ became widespread in its metaphorical sense and, after 1945, during the Communist period, proved to be good enough to debunk the conservative mentality of the preceding decades. Th e ideological contrast with the interwar period excluded Baroque as an age of ‘feudal reaction’ from the ‘progressive’ interpretation of the past. However, from the 1960’s onwards, scholars reconciled the study of Baroque with Marxist ideology, liberated it from previous dichotomies (‘Catholic’ – ‘Protestant’, ‘national’ – ‘alien’) and fi nally, removed its harmful ‘Neobaroque’ connotations. Th us Baroque could become a part of national heritage in a socialist milieu, preceding the fashion of the term ‘cultural heritage’ after the fall of Communism, which helped to reframe Baroque in a Central European context. Around the year 2000, ‘Neobaroque’ still appeared to be useful as a critical term against the enduring patterns of interwar society. Both notions and their interference reveal a friction between Baroque and modernity, an anxiety concerning the persistence, survival and reminiscence of a much debated historical period.