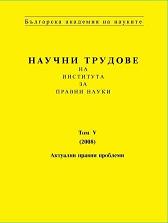 Summary/Abstract: The study analyses the regional conventions on suppression of terrorism in particular region of the world: the Arab countries, Islamic states and Africa. The matter of the regional international law regulation of the fight against terrorism is not researched in the domestic specialized literature. The problem studied represents both theoretical and practical interest, especially after the accession of Bulgaria to the European Union and the fact of sharing the common foreign and security policy. Three regional conventions are analyzed: the Arab Convention on the Suppression on Terrorism, signed in Cairo on 22 April 1998, the Convention of the Organization of the Islamic Conference on Combating International Terrorism, adopted at Ouagadougou on 1 July 1999 and the OAU Convention on the Prevention and Combating Terrorism, adopted at Algiers on 14 July 1999. The study is grounded on the positive normative methodological approach in the context of the institutional framework of the three above mentioned conventions: the League of Arab States, the Organization of the Islamic Conference and the evolution of the Organization of African Unity to African Union. The author makes a comparative study of the existing legal definitions on "terrorism" in the three conventions, emphasizes the regional particularities of the legal regulation against terrorism, draws conclusions on the basis of the universal international law regulation of the fight against terrorism.