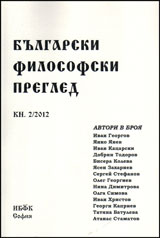 Summary/Abstract: This paper treats a number of diverse approaches within the theoretical reflection on political transformation in Bulgaria after 1989. The approaches are classified not according to a political or ideological criterion, but according to the kinds of premises and methods they use. On this basis the advantages and shortcomings of several approaches used by Bulgarian authors in constructing a theory of political transition are (though not exhaustively) discussed: philosophy of history in its Marxist futuristic version; the so called “long-term” approach; the Marxist postmodern approach; the Marxist conspiratorial approach; the approach from the perspective of social contract theories; the eclectic propaganda approach. In conclusion some features of a new approach are sketched, which is meant to avoid the disadvantages and incorporate the advantages of the approaches described.