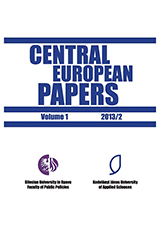 Summary/Abstract: After the end of the Bosnian annexation crisis Austria-Hungary was able to improve its position in the Ottoman Empire. This was enabled not only due to successful negotiations with the Porte which enabled the solution of the crisis, but also by the cautious policy of Vienna during the coup of 13th April in Istanbul. During the second half of 1909 Austria-Hungary was able to considerably improve its relations with the Ottoman Empire. Although Vienna was able to profit from this fact in some cases as a whole the favourable situation was not utilized to improve the stance of the Habsburg monarchy on the Balkans. Since the second half of 1910 the relations of both states were disturbed by the repeated revolts in Albania. The effort of Austria-Hungary to force the Porte to reach some sort of deal with the Albanians was in vain. Moreover in the second half of 1911 the mutual relations of both states were considerably worsened and complicated by the outbreak of the Italo-Ottoman hostilities.