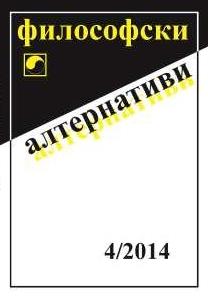 Summary/Abstract: This essay is structured around two main subjects. The first represents a very clear mythological schema, of which the hidden literary unconscious traces are restored in the second line of study, the modern literary one. The first research subject is related to the ideology and cult practices of Thracian Orphism, primarily of the type dealt with in Bulgarian Thracian studies since the 1980s (Alexander Fol, Ivav Marazov, Dimitar Popov, Roman Tomov), as well as the classical studies on Orphism (Karl Kereny). However, the topic of the study is not Orphism as such, but only one aspect of it, a determinative one for its ideology: the solar-chthonic syncretism, an antagonistic union of the solar and the chthonic, i.e. the Apollonian and Dionysian. This antithesis is resolved in the study into a set of heterogeneous but isomorphic cultural-philosophical relations: male–female; conscious–unconscious; culture – nature. In order to achieve this, the article demonstrates the co-existent (oscillatory, according to this study) character of this distinction–identity (pair): the splitting of the primordial androgynism, the division of the One into two, coincides absolutely with a regressive, counter-directed force striving to unite the two into One. The problem is examined simultaneously in an abstract-philosophical aspect – in terms of the Pythagorean heritage and Platonism, and in a concrete-historical aspect, e.g., in terms of the important Orphic substratum in the Christian religion. The second research line is the attempt to establish how all of these fundamental features of Orphism are present intricately and profoundly, i.e. unintentionally and unconsciously for the poet, in Yavorov’s late poetry (which this study conventionally terms „Sleeplessness“ language), considered as a perfect example of modern language (vocabulary). The gender projection of the antithesis is central: this is essentially a sparagmathic male-female split in the initial stage (the poem „The Sun Went Out“); the transsexualization of the modern (poet’s) „soul“ per se into a soul-anima in the second stage. In turn, the Thracian Orphism in this study exemplifies mythical thinking in general, including cosmogonic models. But it also has a value of its own (as relativized in respect to the second subject – Yavorov’s poetry), in so far as some elements of Orphism, developed on the lands included in present-day Bulgaria, have „survived“ as a „building material“ of Bulgarian national mentality and spirit (the so-called „Dionysian source“, actively debated in Bulgarian culture; the study touches upon this topic). The ultimate goal of this large-scale coupling, of the overlapping of the first and second research subjects, is to elucidate the deep atavistic and counter-modern character of modernism. In striving to achieve this, the study follows up and gives additional arguments in support of the main thesis presented in the monograph Yavorov – Botev: Modernism and Myth. ...