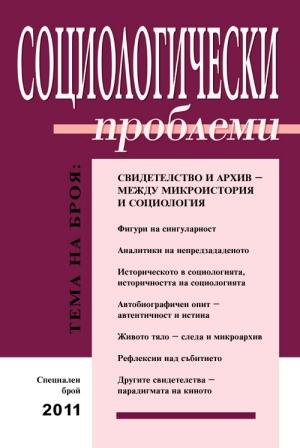 Summary/Abstract: The article presents a possible approach to the analysis of the situation of accepting/transmitting inheritance (in the widest sense) among a migrant group – the one of Bulgarian emigrants to Turkey – and an attempt is made to make explicit its practical logic. To trace the actual ‘sociogenesis’ of the process of inheriting, there must be a double process in its conceptualization: 1) on the one hand, conceptualization of ‘the constitutive dispositions of the habitus’ that are able to generate not only correct actions and practices but also disappointments, tensions, conflict and contradictions, psychological traumas and repressed intentions; 2) on the other hand, conceptualization of the way in which the social order becomes imprinted in the bodies as it ‘collects, channels, reinforces or counteracts psychological processes’. Thus the conceptualization of the process in which, through the figure of ‘inheritance’ social positions and biographic trajectories are ‘eternalized’ in practice, comes out linked to the question how the ‘ontological complicity’ between biographical and social illusio happens when it is possible (as in the case of ‘Bulgarian emigrants’) that their formation is the result of different social conditions. Finally, taking advantage of the specific manner of ‘praxeological understanding’ that permits simultaneously to retain the many points of view and layers in what the respondent ‘testifies’, the article proposes a conception of the contradictoriness itself of the studied agents as heirs. For this purpose, the analysis first dwells on the theoretic justification of the diverse modalities of ‘inheriting’ and then on their empirical verification by the study of specific ‘cases’ that are representative of the studied group.