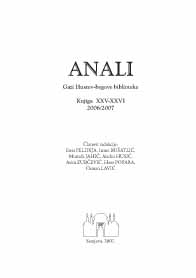 Summary/Abstract: “History of Bosnia”, according to size and content, presents an invaluable work in which one historical period of Bosnia and other parts of the Bosnian elayet are described in detail. In the first part of the book, the author recorded some details related to development of cultural and literacy in pre Ottoman Bosnia and about Bogumils, and than after that he showed the general picture after the conquest, the spreading of Islam and the development of towns. The things which make this work valuable is the fact that in it are written all major events related to cultural courses in the Bosnian elayet after the conquest of the Ottomans. Apart from the facts of conquest, the strengthening of boundaries, the sacking of vezirs and governors, this work contains cultural events and for that reason it is important evidence that the period of Ottoman rule was not that dark as some would like to show it. Bosnia could develop on its own in all fields because it enjoyed special status at Ottoman sultans, which dr. Safet-beg Bašagić wrote about it: “Bosnia and Herzegovina did not loose its independence and freedom in the 15th century, but only in middle of the 19th century. Namely, when Omer-pasha Latas smashed them down with nizam, looted them, destroyed and with his Byzantine cunningness deprived them of independence and all rights. Before him Herzeg-Bosna always was a state within a state which was ruled by Bosnians, favorable governors or own sons in the name of sultans.” The author in this work recorded all personalities who in any way contribute to the cultural development of Bosnia in Ottoman rule, as it was, governors, scholars, authors, and heroes in folk poetry. Listed were all sacred, economic, cultural-educational and other buildings which were built throughout the Bosnian elayet. Described are some everyday events and interesting facts about tradition of the Bosnian people. Based on this work it is possible to make reconstruction of all events in which not only Muslims took part, but also Christians, Jews, and other people who worked in Bosnia or lived for a period of time in these regions, among them Turks, Hungarian, Austrians, Arnauts and others. Many of these facts, especially those regarding cultural elements in our surrounding have already been presented in the works of authors who used Muvekkits work, so this first complete translation on Bosnian language is only proof of its authenticity and valueability of the original.