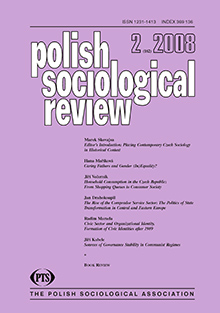 Summary/Abstract: State strategies in Central Europe have converged towards a distinctive form of the competition state. This article explains the moment of convergence and identifies the political support of the competition state by making three principal points. First, the internally oriented strategies were exhausted by the end of the nineties. Second, it took some time until the foreign investors became really active in the region. Third, the processes of state internationalization worked only when the structural opportunities and political possibilities of themoment allowed domestic groups linked to transnational capital—the comprador service sector—to come to the fore and translate the structural power of transnational capital into tactical forms of power within national social formations.