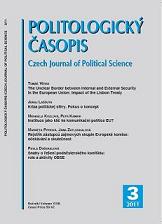 Summary/Abstract: EU member states are prime examples of post-modern states that have been greatly influenced by blurring of the border between the ‘inside’ and the ‘outside’, between internal and external security. European integration has played an important role in this process. Cooperation within the realms of both Common Security and Defence Policy and Justice and Home Affairs has compromised the traditional role of borders and is reflected by the work of European institutions, such as the Civ-Mil Cell or the Joint Situation Centre. The paper analyses the impact of the Lisbon Treaty on the legal basis, institutions, and policy content of EU security. The question is asked whether the provisions of the Lisbon Treaty constitute progress or a setback with regards to a comprehensive approach to security.